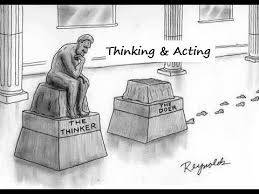 If wishes were horses, everyone would ride − the statement is true beyond a shred of doubt. But how much is the gap between our thoughts and deeds or the real difficulty in executing our ideas?

While thinking is taking place inside the brain, we must carry the actions out at the physical level. The body has to go through the grind to realise the dreams brewing in one’s head ─ an easier said than done proposition. Implementing an act requires effort; The body mostly remains stuck with the thoughts without putting them to practice.

Some contend that too much contemplation leads to immobilisation. It destroys the drive or the impulse to act. No wonder, in a war sometimes, the fools who make the first attack emerge victorious as they catch the other side unaware meditating and thinking. Equally true is the premise ─ think before you act, meaning we must do a Vichara or deliberate before acting. The results could be disastrous if we don’t premeditate, i.e. if we fail to plan, we plan to fail. A strategy ought to be formulated before the match to decide on the moves and nuances of the game.

Hence, the mind-body complex must work in unison, producing outputs in their respective areas. When one of the two is hyperactive and other dormant, the result is chaos and confusion. But what exactly is preventing us from doing what we envision?

The fear of failure and the want to do it perfectly are the real culprits ─ the roadblocks to our acting forcefully on our thoughts. We reserve our action fearing that the move might not be right or bring forth the intended or expected outcome. Obsession with the consequences is the killer of our acting with full enthusiasm and energy. We keep delaying the execution of a plan infinitesimally for dread of disappointment. By not performing, we don’t have to face the after-effects of our endeavours; we could absolve ourselves from taking the blame or responsibility.

Likewise, our fixation with being perfect the very first time makes us slow down after a few strides. We stop not because we are tired but because of our preoccupation with being accurate and right. But the world where it is today did not garner its present status by thinking alone. Our ancestors had to act on their thoughts and hunches. No great discoveries and inventions of the world could have come without a trial and error. Edison had to fail 10000 times before finding the right element for an electric bulb.

We would stay in a troubled and tormented state until we match our thoughts with deeds. It needs a commitment to follow-through on our visions, but the paybacks are enormous in terms of satisfaction and peace of mind. Ideas not put to acts keep surfacing in the sleep in the form of nightmares. Behind a night full of fantasies is a day spent short of chasing one’s dreams!